Canadian hospitals face a day of aggression, as demonstrators voice their displeasure with pandemic protocols and vaccine passports. Eric Sorensen looks at who’s behind the protests, and what can be done to keep hospitals from becoming battle lines.

As those disruptive rallies happen, Liberal Party Leader Justin Trudeau is vowing that, if he’s re-elected, he will make it illegal to block access to health-care sites. Abigail Bimman explains which facilities would be affected, and whether a new law is really necessary.

Meanwhile, despite claims of wanting to run a positive campaign, Conservative Party Leader Erin O’Toole focused on personal attacks over policy. While campaigning Monday, O’Toole called Trudeau “privileged, entitled, and always looking out for number one.” As Mike Le Couteur reports, strategists say the sudden mudslinging may be a sign of desperation.

As the COVID-19 pandemic continues and the highly transmissible Delta variant spreads even further, some Canadian schools are being forced to change their pandemic protocols. Heather Yourex-West reports on the difficult start to the school year.

Also, a family of two adults and four children has been found dead in Millvale, Nova Scotia after a travel trailer caught fire. Ross Lord reports on the investigation into the tragedy.

And voter turnout is typically low among younger Canadians, but this year, many of them are feeling more energized to head to the ballot box. Farah Nasser looks at their biggest political concerns, and the barriers they face in voting. 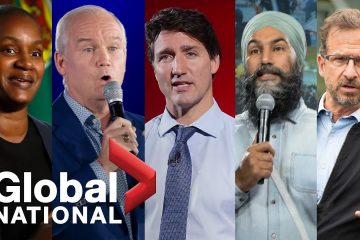